No Time on My Hands

Grace McCance was born in Missouri on April 23, 1882. When she was three her family moved to a sod house in Nebraska. She and her older sister Florry would play with their corn husk dolls all day. When she was 7 Grace was herding the cows as there was no son to help with that chore. Grace liked being outdoors but the days were long and Grace begged her mother for scraps of cloth so she could learn to quilt. With fabric being so scarce her mother was very reluctant to give her any but she eventually agreed to let Grace have a few scraps. Grace had watched her mother carefully and took great care to make her stitches small and worthy of more scraps. Grace had three dreams in her young life: to marry a cowboy, to make the most beautiful quilts in the world, and to soar above the clouds. All her dreams came true. She became a school teacher and when she was 17 she saw a cowboy and when she was older he was the one she married. Bert "Pinnacle Jim" Snyder took her to his cattle ranch in the sandhills of Nebraska and there Grace and Bert had four children. Grace made many award winning quilts and travelled to other parts of the country to exhibit them. She was inducted into the Nebraska Quilter's Hall of Fame in 1980.

You can read all about her life in "No Time on My Hands" as told to her eldest daughter Nellie. It is a remarkable recounting of life on the prairie at the turn of the century. Reading it and looking at my house, my sewing machine, and all of my fabric, I can see that I am truly blessed. When Grace and Bert married at his parent's house in North Platte, Grace brought a bolt of fabric with her to her new home so she could quilt. In the book she relates how she did not step off the ranch for six months at a time, so even though she had many chores and children to raise, there was still plenty of time to sit and sew. All of her quilts were made by hand. The most famous of her quilts is called Flower Basket Petit Point, which she made in 1943. She copied the design from a china pattern. To mimic the petit point she pieced triangles to make a square, one light the other a bit darker. Eight of these units would fit on the size of a postage stamp. It really seems impossible, doesn't it? Worried that she might be infringing on someone's copyright (sound familiar?), she wrote to the china company and asked if it was all right. Not only was it all right, the company president sent her a set of china dishes and kept on sending pieces to her over the years.

You can still purchase "No Time on My Hands" and you can see a 2007 lecture about her life and quilts here:

Some of these quilts may be familiar to you already. I'm sure I've seen both the Petit Point quilt and the hexagon quilt before. Imagine doing such fine work by hand and designing quilts without the aid of a design wall or Electric Quilt. I think her work also says a lot about how we can chose to spend our time. I know I complain about not having enough time to do the things I want to do, but then I waste time watching television or playing Candy Crush Saga. It's really all about making choices.

You can read more about Grace McCance Snyder and see some of her quilts here.

By the way, Grace's third dream came true, too. She flew in an airplane home from a trip to Oregon. Her son Miles eventually bought an airplane so he could fly his son to school in the morning and he would pick him up in the afternoon, too. Apparently the roads in Nebraska are about as bad as they are still in Maine!


Here's what I've been up to today....I made this hat wreath and curtains for the kitchen. Red gingham to go with my new green kitchen cupboards. 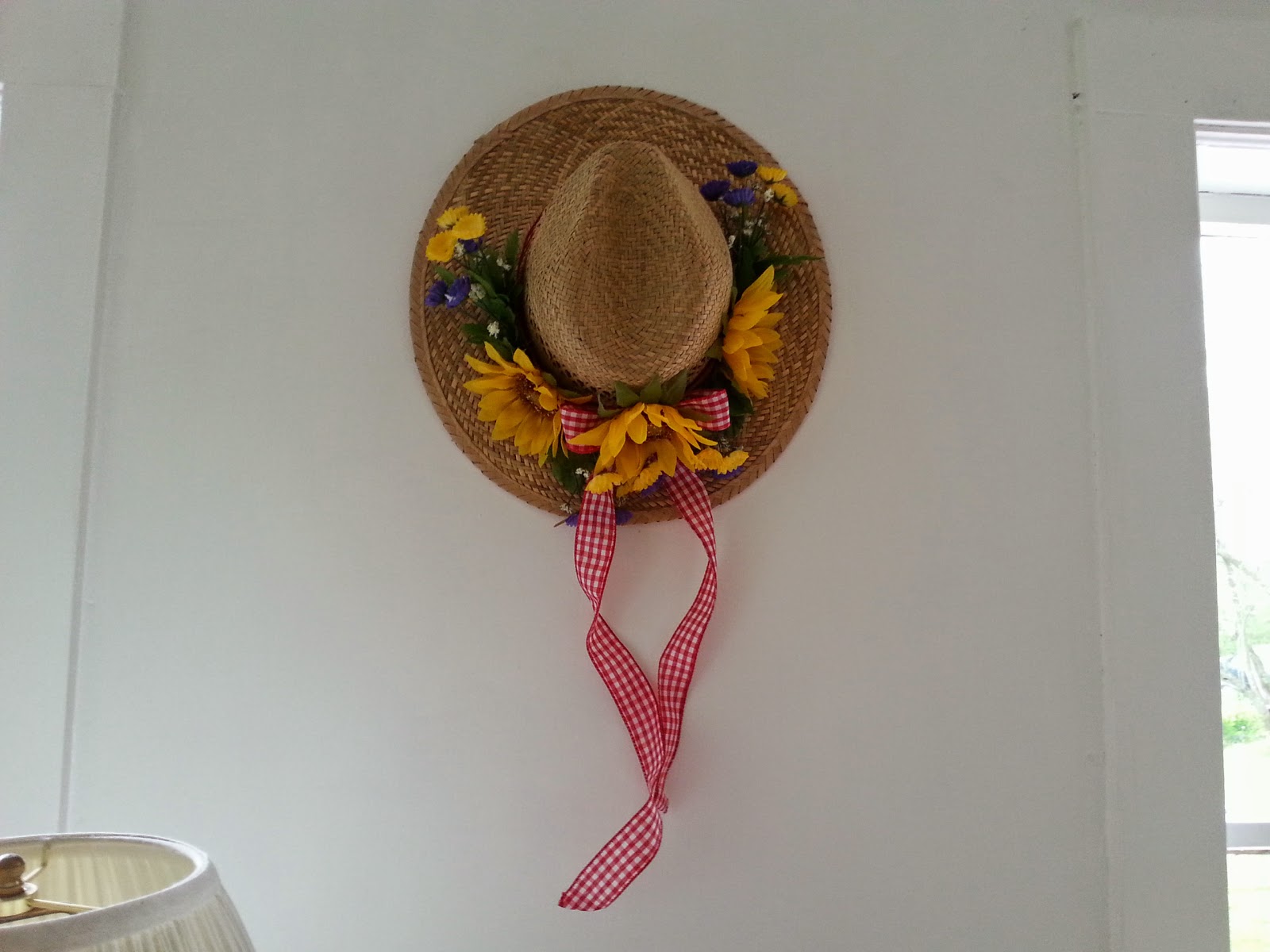 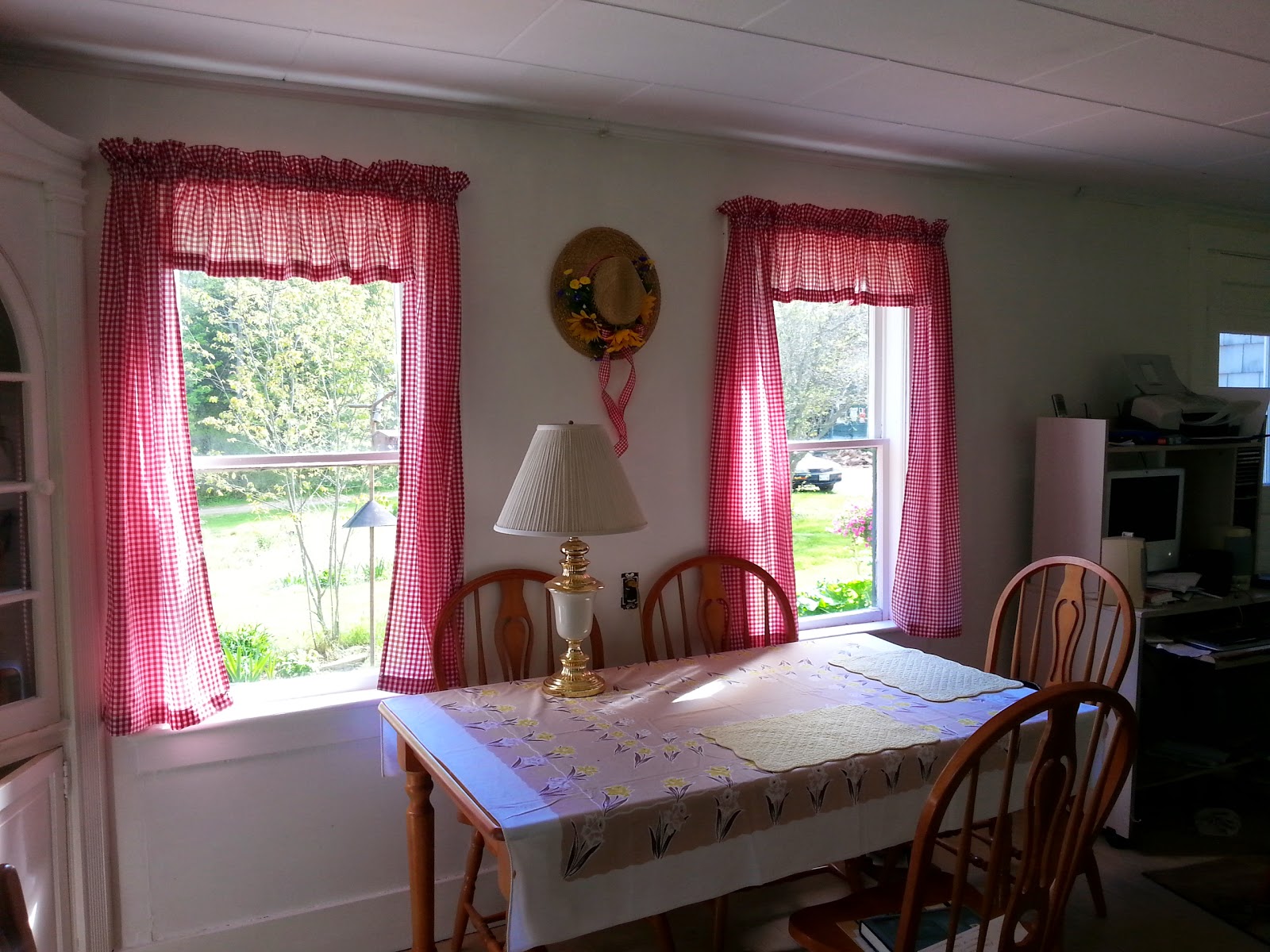 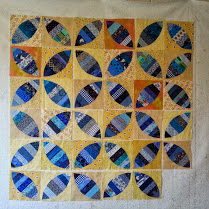 Here's my melon quilt so far. There will be six blocks across and eight blocks down for the center of the quilt. I have two shades of solid turquoise for borders and am undecided about what else will be in the border. I'm thinking of entering this in the Maine Quilts show this summer. Deadline for entries is May 15 so I will need to make some decisions very soon.
Posted by Beth French at 6:47 AM No comments:

Listen to Susan's explanation of how she made her award winning quilt. It doesn't seem possible anyone could make such an intricate and beautiful quilt. Her steps and mis-steps along the way and how her life unfolded during the making of this wonder will touch your heart. We all have a story to tell and in the future no one will know the heartbreak behind this quilt.
Posted by Beth French at 7:47 AM No comments: