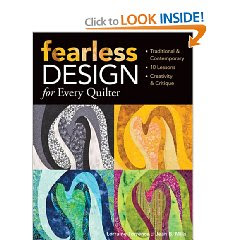 Art Quilters of Maine has spawned another group which I joined. The group is based on the book Fearless Design for Every Quilter: Traditional and Contemporary 10 lessons in creativity and critique by Lorraine Torrance. As the title says, there are ten lessson, which we are going to cover over ten months. We had our first meeting in February.

The first lesson is on balance. The book suggests doing the exercises with fusbile web and making the samples 20 inches square, which is a good sized block. The idea is to work up your sample quickly with the fusible web. The sample is not meant to be a finished product, just an exercise to learn the design principle. 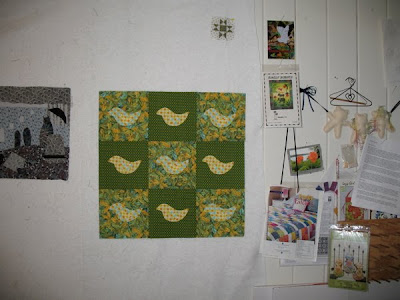 First off I had to choose a shape to work with. The exercise called for three samples using the same shape for all three. I chose this bird after discarding my first choice as being way too complex to cut out multiple times.

This first example is symmetrical balance. I rather like it. Symmetry is very pleasing to the eye. I had to vary it a bit or it would have been too boring. It would be cute to add some legs and eyes to these little birdies, but I doubt that I will ever get it done.

I decided not to crop these photos so you could see some of my stuff. So much more interesting when you get a peek at someone's stuff, isn't it? Actually, I was surpised to see those little hangers, I've been looking for them! The gray piece on the left is the March exercise. You will have to wait for that one. 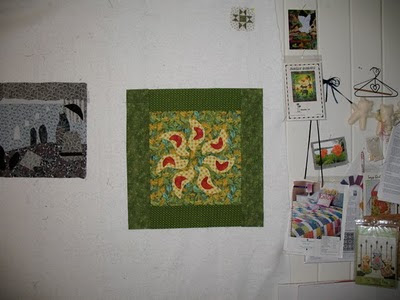 This one is rotational balance. With a bit more fiddling I could have made the center more of a star between the birds, but I didn't notice that until everything was fused in place. Good idea for future reference. 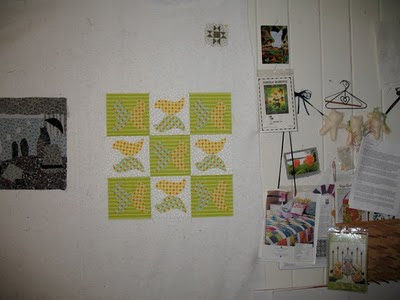 This one is my idea for mirror symmetry. Some people said to be really mirrored that some of the blocks should be flipped, but I like it as it is. 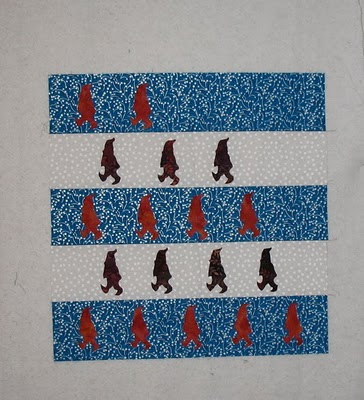 Tomtens! Tomtens marching through the snowy night. This is the figure I started with. Besides being too complicated to keep cutting out, I thought the image was too small, but I do love him. This one is shifted row symmetry, which could have been done a bit better, oh well. I like the idea of them marching off into the night.
Posted by Beth French at 5:27 PM 1 comment:

The Challenges of Olympic Events 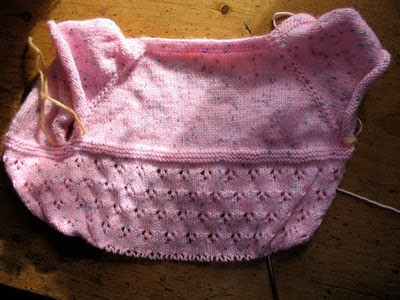 Ah, the challenges of Olympic knitting! I guess I should know better than to combine my events. Exciting short track and accurate lace knitting do not mix. Somewhere along the third lace pattern row I dropped a couple of stitches. Time to rip. I'll reach the podium, have no fear!
Posted by Beth French at 2:20 PM 1 comment: At the Art Quilts Maine meeting on Saturday two members showed us how to make these wavy checkerboards from two fused fabrics. They used a technique described in Simply Stunning Woven Quilts by Anne Faustino. You apply two-sided fusible webbing to two pieces of fabric, mine were about 9x12 inches. You pick one as your "warp" and the other as your "weft".

The purple strip was my warp. (Can you turn your head so that the piece is vertical? Thank you.) I cut the purple first with a rotary cutter in wavy strips. Set each strip aside after it is cut and keep the strips in the same order that you cut. Do the same for the second fabric, but cut crosswise and keep those in order, too.

Pin the warp fabric to a surface to hold in place. Then weave the weft fabric in, keeping the same order as when cut so the wavy pieces fit together. Snug everything up so there are no gaps. Oh, and do this on a foundation of some sort, muslin or batting, as the whole thing will be ironed onto the backing to fuse in place.

It was really fun to do this as a group. Many interesting fabric choices and combinations. A couple of people who had done this before chose to make a circular shape and a dome shape. Very interesting and lots of design possiblitis, for sure. 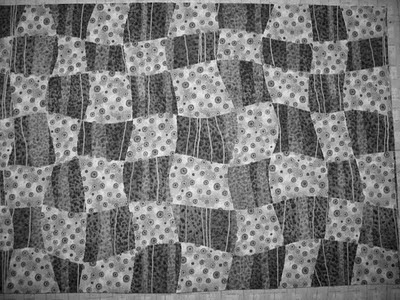 Here is my block in black and white. My finished piece is about 8x11. These would make fun placemats. Also good for background for an applique piece or a section of a wall hanging. Try it, you'll like it! Send me your pics if you do!
Posted by Beth French at 5:06 PM No comments: 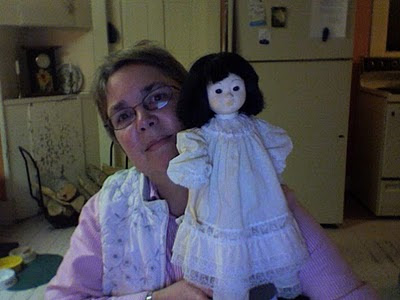 Recently I went to the new farmer's market at Fort Andross in Brunswick. I had never been before and parking was terrible. I finally found a spot behind the building and after much manuevering managed to back my car into a tight space. The guard rail was covered with snow. I sure hope there was a guard rail, otherwise it would have been a nasty fall into the black, cold river!
I didn't buy anything at the farmer's market (sorry farmers), but I did bring home this little Asian girl doll for my collection. Her tag says "Ling Ling-Dolls by Pauline". I would like to make her a new outfit someday. 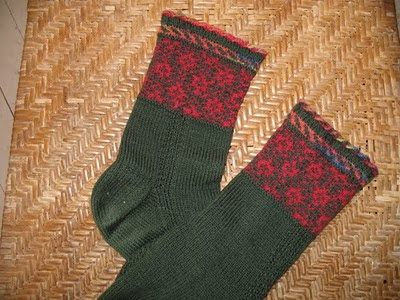 These sock were knit from Nancy Bush's book Knitting on the Road. I bought the book in 2003 and probably made the socks then, too. These socks have finally worn out. Regia sock yarn is very hard wearing, but these are threadbare in spots. The cast-on at the top was very interesting-you actually twirled the needle to get the twist, which is called Latvian twist and comes from Lucy Neatby. I feel sad to discard these old friends, but, you know, I knit the foot too short and that has always bothered me a little bit. 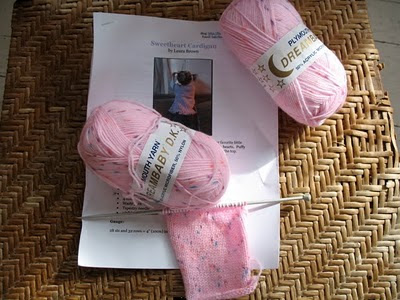 Olympics knitting! I joined the Ravelry knitting Olympics group with the Knitmore Girls. I am going to make this adorable puff sleeved lacy sweater for my grand-niece. The pattern is called Sweetheart Cardigan by Laura Brown. It can be found in Babyknits, but is available as a free download on Ravelry.
The RavOlympics is a knitting challenge where you cast on during the opening ceremony of the Olympics and finish by the closing ceremony. I love to watch the Olympics, so I thought this was a wonderful opportunity.