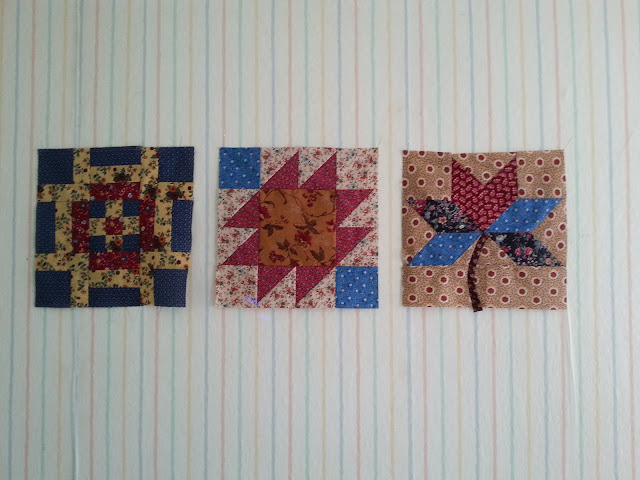 I've started Barbara Brackman's block of the month called Westering Women. Barbara Brackman has written many books on quilt history. This year she started a series of blogposts on her Civil War Quilts blog that is all about the western migration from Independence, Missouri that started in the 1840s. Each month she posts some of the history along with photos of the era. She's chosen quilt blocks to represent different aspects of the journey west.

The first block, on the left, is called Independence Square. The middle block is called Indian Territory. The third block is called Sweet Gum Leaf. I've got some more work to do on that one. I cut the bottom rectangle too narrow so I will have to remove my applique stem and sew on a new bottom band.

Most of the fabric I'm using for this quilt is from a bundle I bought at our Back Road's auction this past spring. I have lots of blue fabrics and I added a few of my own reds. The red triangles in the center block I overdyed to be more orangey red rather than pinkey red. I don't really want to make a pink and blue quilt. This one will be blue, red, and tan or those nice Kansas Trouble buttery tans. I bought four of those at the Busy Thimble recently. Love them! The center of the Indian Territory block is one example.

I've got two more two more blocks, April and May to make so I can be caught up for the June block that will be posted this week. I don't think I'll make it but will try to get them all done before the end of July so I can sew the July block before the end of August. Sounds like a plan!

Meanwhile, I've been neglecting my hexie quilt...but just a little. I'll have to think of posting about that one, too. So completely different from the Westering Women quilt!
Posted by Beth French at 4:13 PM